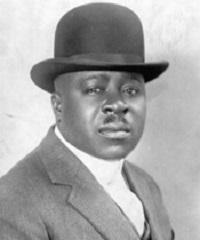 Robert S. Abbott was born in St. Simons Island, Georgia in 1870 to parents of former slaves.  He studied the printer’s trade at Hampton Institute (now Hampton University) form 1892-1896.  Met with discrimination in the industry, Abbott studied law at Kent College in Chicago where he settled.  However, once again he faced discrimination, even being told by a successful African American lawyer that he was too dark to have any influence in Chicago courts.  Not one to be discouraged, Abbott took $.25 of seed money and started the Chicago Defender on May 25, 1905.  Heralded as the “World’s Greatest Weekly,” he used the publication as a tool to fight against racial injustices.  Quickly becoming the most widely circulated Black publication in the country (with 100,000 copies), the Defender is credited as having a huge influence on the “The Great Migration.”  Through his persuasive writing about how treacherous it was to live in the South and the opportunities for justice and prosperity in the North, Abbott’s words encouraged thousands to move in search of a better lifestyle.

Mr. Abbott knew how important it was to encourage youth to strive for excellence.  After success with the Defender’s “young people’s page,” he, along with his managing editor Lucius Harper, formed the Bud Billiken Club in 1923.  By 1929, the club’s popularity had increased so much that Abbott initiated the annual Bud Billiken Parade to celebrate it.  The Bud Billiken Parade, which focuses on preparing children for the school year is held in August and  is the oldest African American parade in the country.

The Chicago Defender will celebrate its 111th anniversary this year.  Here’s to a true pioneer in print media who made it his mission to educate his people and encourage them to fight for their right to enjoy peace and prosperity.